Every sport is fueled by a desire to improve.

In skateboarding this desire is found in the weeks nailing down a new trick, and the months spent trying to land it with consistency. The ability to track this improvement is invaluable.

While landing on the pavement with both feet still on board is rewarding in its own sense, seeing the data behind that progress is solid evidence of how far you've come.

My senior project attempts to accomplish this task. The device comes in the form of a small “trick tracker” mounted to the bottom of one’s skateboard. It should instantly recognize which tricks the user performed, and report this data to the skater's phone. 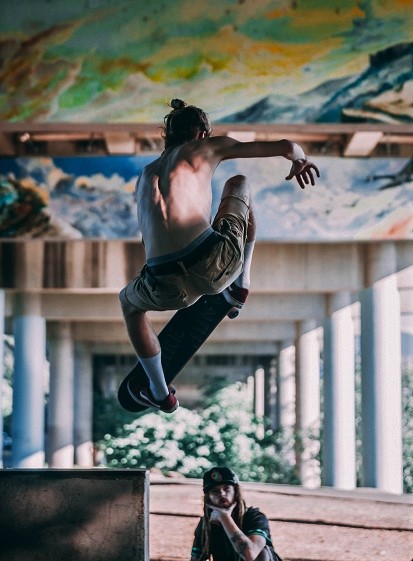 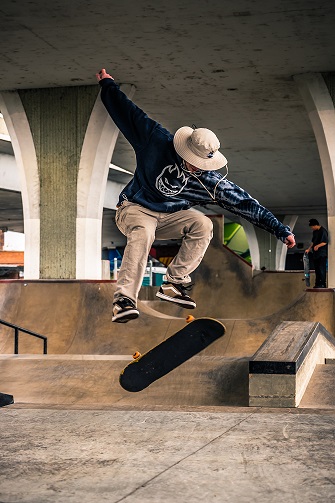 Googling "skateboard trick tracker" shows prototyped products that never made it to market. Currently a skater would have to manually tally their trick statistics on a notepad or their phone, rather than taking advantage of the automatic tracking provided by this device.

The tracking and point system will bring a game-like element to the skateboarding experience. 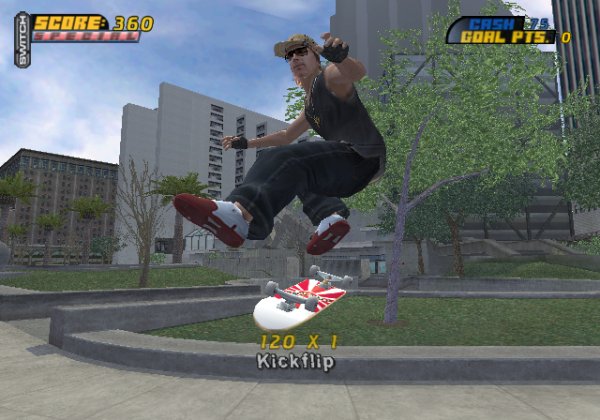 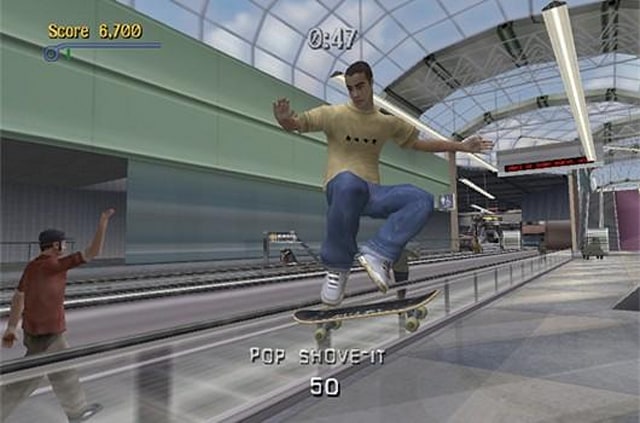 My top goal for this project was to make the device as unobtrusive as possible.

My vision for the product was to be an assistant more than a hassle. No one wants to be hassled by another tech gadget, or be conscious of any effect it could have on the skateboard. This condition alone puts several requirements on the trick tracker, which I will rationalize below.

Required is a lightweight device utilizing a small footprint on the board. Anything weighing over a fraction of the skateboard's weight would noticeable change its movement. The skater should also not have to worry about the tracker sticking out and potentially hitting the ground during a trick. Another condition of unobtrusiveness is battery life. This device lasts 8 hours on a single charge, meaning it will last several sessions before needing a recharge via USB. Lastly, one of the main features that keeps the trick tracker from slowing one down is its ability to wirelessly provide its data to the skater's phone.

The full list of user requirements can be found in the following table. 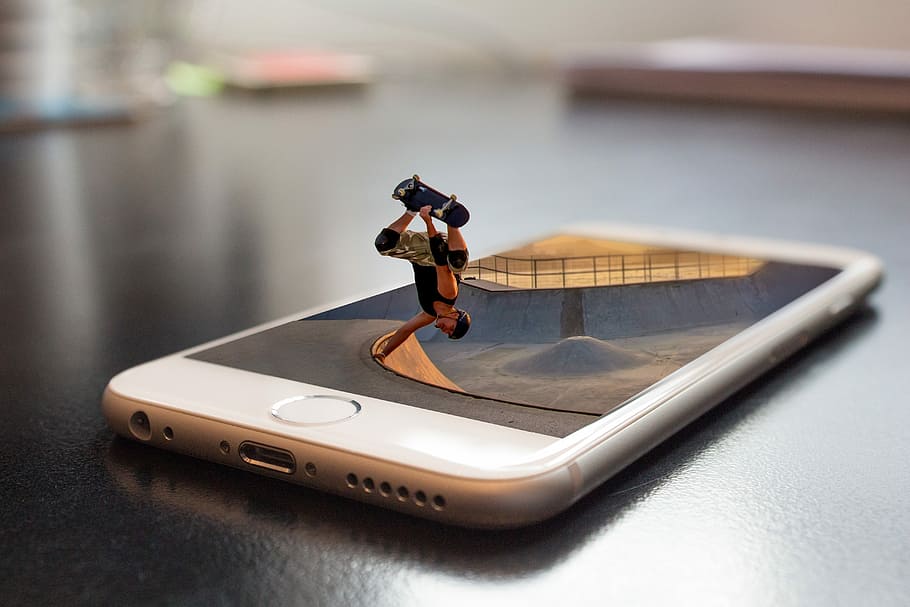 The trick tracker is intended to be a low cost solution. Based off the total cost of components I would market the trick tracker at $99.99, slightly over 3x the cost of manufacture. Component costs would be cheaper in mass production. I believe this is a fair MSRP given the fact that this would be the only device of its kind on the market. Below are the component prices if ordering at a quantity to produce a single board.


Board dimensions come in at just 1.35" x 1.57" including the bluetooth module. Below is the 3D rendering of my final board design. 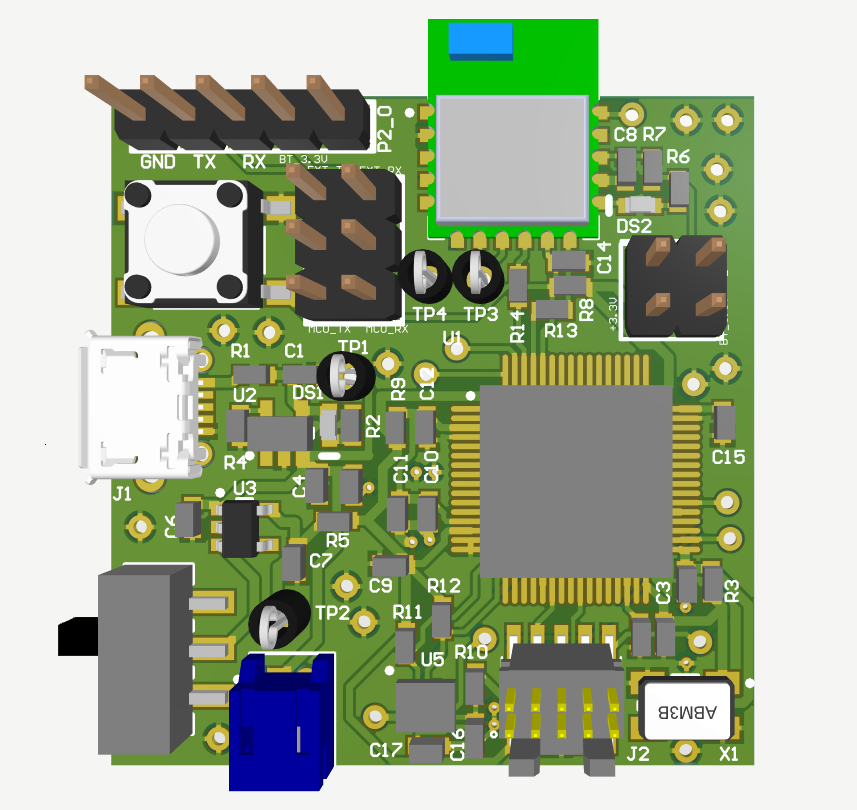 The original timeline for the development of this project was planned prior to beginning hardware and software design. This fell apart rather early due to the COVID-19 pandemic. Boards fabricated in China were delayed while in-person classes were cancelled at the same time. With no access to previously available lab equipment, I moved to designing a proof of concept device utilizing just the K22F development board and its on-board accelerometer.

The last step before beginning design was determining what the product does and how, in the form of user and system requirements. From here I could determine the components necessary to make the trick tracker a reality.

After determining the scope of the project and nailing down system requirements, it came time to design a schematic. Schematic capture and PCB layout were done entirely in Altium Designer. 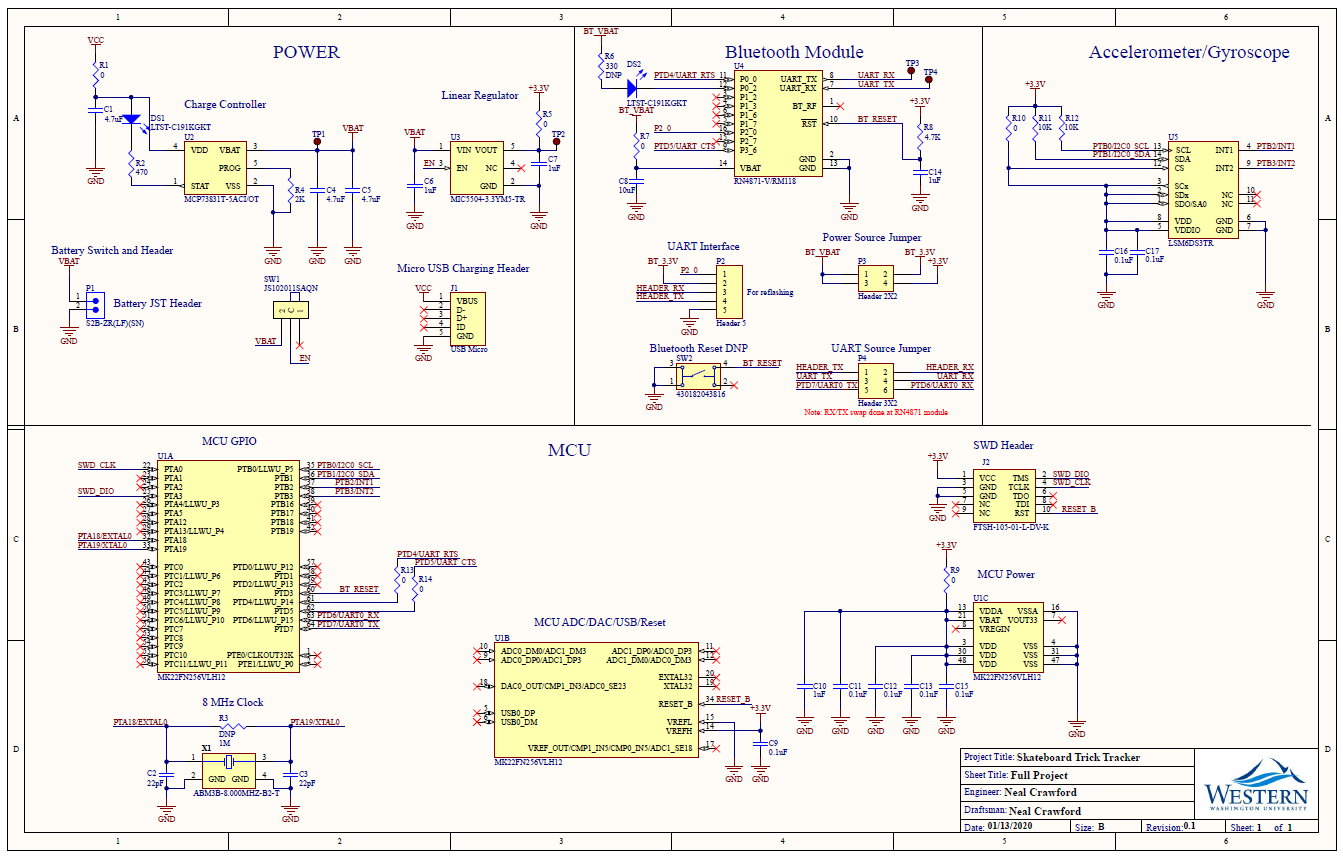 With the schematic finished, I could start the board layout. This process took the longest because of my size requirements. Just placing the components took many iterations, as I squeezed everything into the smallest possible footprint. Routing each trace using few vias took even longer. The final result was a board measuring 1.35" x 1.41" (34.4 x 35.8mm) without the bluetooth module. The module adds 4mm to the long edge of the board. 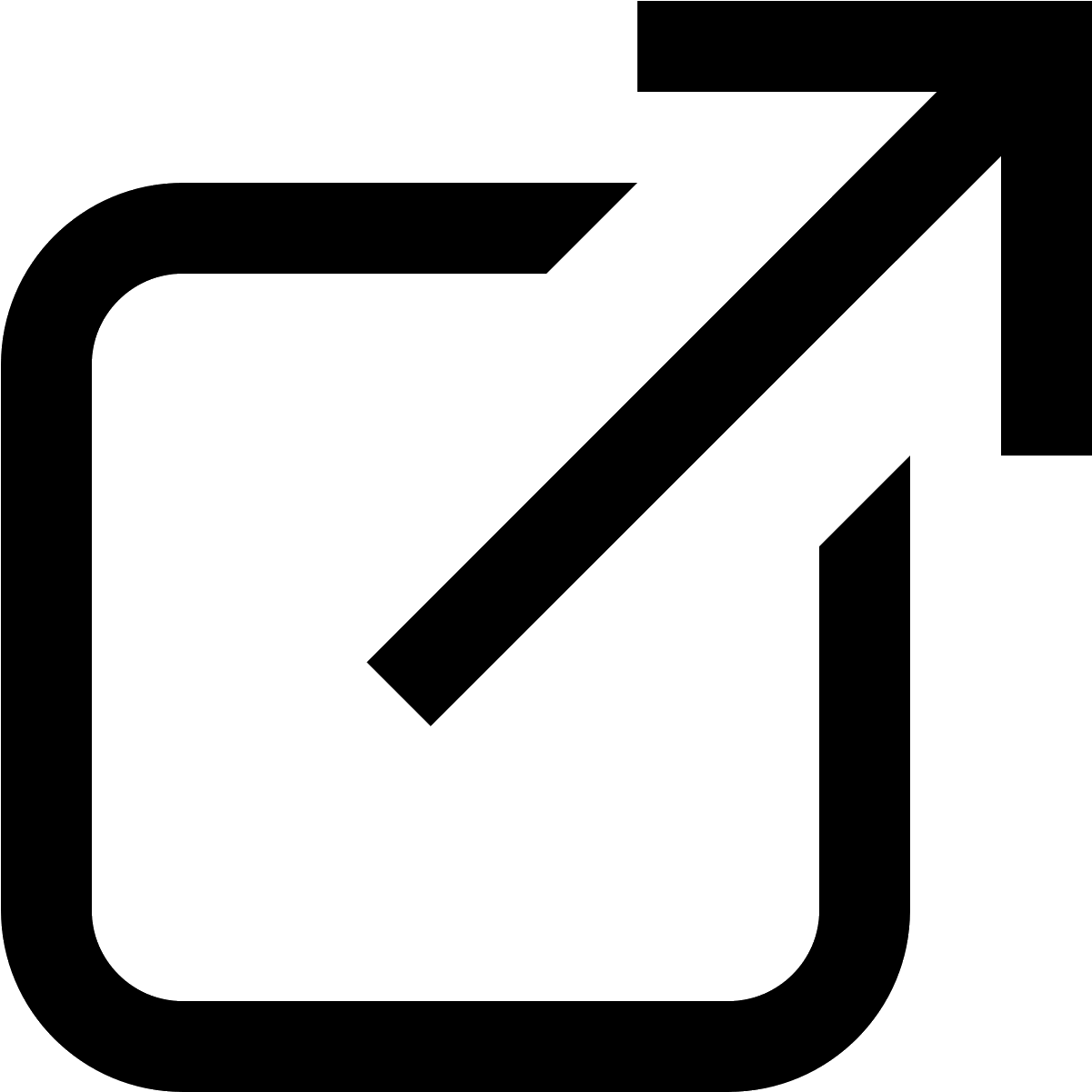 This figure below describes the main event loop of the program. Pressing SW3 on the K22 will begin recording a new trick for potential storage in the database. The accelerometer is sampled at 800Hz (every 1.25ms). This is timed using the K22's PIT.

If a threshold of movement is exceeded, the next two seconds of motion data are captured. At the end of this two second period, if the user was recording a trick for the database, they may confirm by again pressing SW3. If they don't want the trick saved they may press SW2 and return to the main event loop.

If no trick is being recorded, the system will calculate a "movement score" based off the total movement of all axes. Next the system will attempt to match the movement data with a trick stored in the database. 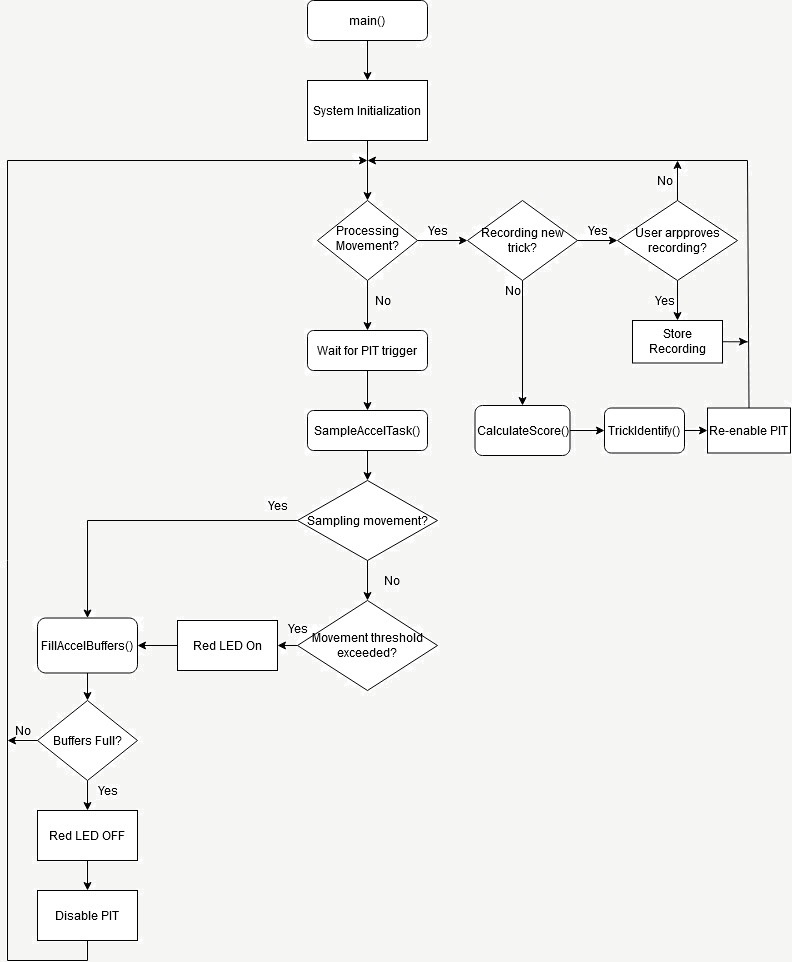 Tricks are differentiated from each other using correlation of acceleration data. The correlation coefficient is found using the following formula:

A coefficient is found between a reference set of data points, X, and the results of the currently performed trick, Y. The more similar X and Y, the closer the coefficient to 1. This is evident in the Y and Z plots. The X plot has the lowest coefficient, since this axis faces the same direction throughout the particular example trick. X axis data can be treated as random noise in this case.